Nicole “Nikki” Guntner focuses her practice primarily on pharmaceutical and medical device mass tort litigation. Nikki Guntner was appointed by U.S. District Judge Brian Martinotti of the District of New Jersey to serve on the Plaintiffs’ Executive Committee in the nationwide Elmiron litigation, where she helps lead hundreds of lawsuits involving Johnson & Johnson’s bladder drug Elmiron, which causes serious retinal damage and a signature eye disease.  Nikki also represents hundreds of individuals and business owners in their claims against Skanska for damages resulting from the destruction of the Pensacola Bay Bridge. She also works on the national multidistrict litigation for Proton Pump Inhibitors (heartburn drugs). 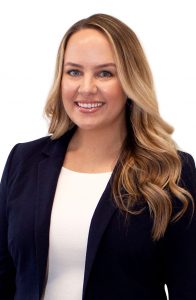 Nikki was a member of the trial team for the final Xarelto bellwether trial in Pennsylvania state court and was involved in the firm’s efforts in the Xarelto MDL, which resulted in a $775 Million settlement. She also represented women suffering injuries from the birth control implant Essure.

Before joining AWKO, Nikki worked with in-house counsel, government agencies, and IT personnel on matters regarding complex eDiscovery issues and corporate document retention to ensure proper collection and production of materials in response to discovery demands.  Nikki worked as an attorney at Willkie Farr & Gallagher in New York, where her practice focused on commercial litigation and government investigations involving financial institutions. She was also temporarily seconded to serve as litigation counsel for Royal Bank of Canada, where she supported the Bank’s U.S. Capital Markets business.