Samuel “Sam” Geisler, a partner with the firm, focuses his practice primarily in complex civil litigation, including pharmaceutical litigation, such as Xarelto, Onglyza and Proton-Pump Inhibitors; and medical device litigation, including Essure and vaginal mesh. He is among those leading the effort against Skanska USA Civil Southeast on behalf of business owners and individuals who suffered losses as a result of the Pensacola Bay Bridge outage. 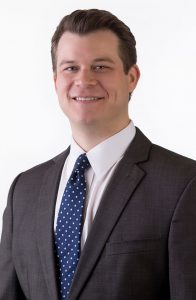 Mr. Geisler has tried cases to jury verdict and served on the trial team responsible for a historic $9 billion verdict against Takeda Pharmaceutical Co. and Eli Lilly & Co. involving their drug, Actos. He presently serves on the Plaintiff Steering Committee for the Essure litigation before Senior District Judge John R. Padova and the co-chair of the Xarelto MDL Regulatory Discovery Committee. Mr. Geisler has served on trial teams for each of three Xarelto bellwether trials in federal court before District Judge Eldon Fallon and two Xarelto bellwether trials in Pennsylvania state court.

He earned a Juris Doctorate from the Saint Louis University School of Law where he received Saint Louis University’s Student Legal Writers Association’s Writing Excellence Award. Also while attending law school, his law journal comment, “A Bridge to Somewhere: How a Bolder Causal Analysis Can Shape Civil RICO into the Ideal Free Market Safeguard,” was selected for publication and appeared in the Saint Louis University Law Journal.  More recently, he co-authored an article published in the Suffolk University Law Review with R. Jason Richards, titled “We, the Class: What the Founding Generation Can Tell Us About Adequate Representation in Class Action Litigation.”

Mr. Geisler is licensed to practice law before all Florida and Illinois state and federal courts. He is a member of the Escambia/Santa Rosa County Bar Association, the Florida Justice Association, and the American Association for Justice.