Labor Trafficking: A Booming Industry in the United States 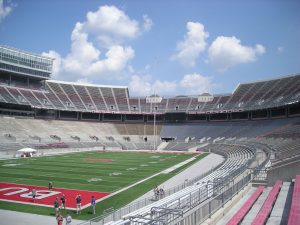 Student athletes called him “Dr. Jelly Paws” and described examinations with him as a kind of hazing. Coaches and school officials knew of his reputation for lingering in locker rooms; some heard directly from students about how the doctor had gaped at or touched them. But for almost twenty years, nothing was done to stop him. A report released last week reveals that Dr. Richard H. Strauss, former sports team doctor at Ohio State University, sexually abused at least 177 male students from the 1970s through the 1990s. According to The New York Times, Ohio State has confirmed that many school officials, including at least fifty athletic department employees, knew about the abuse – and did nothing to intervene.

Ohio State finally removed Strauss from his position in 1996. The doctor then opened an off-campus clinic where he continued to sexually violate his patients. During this time, he retained his tenured faculty position at the university; two years later, he voluntarily retired with the distinguished title of professor emeritus. Strauss committed suicide in 2005.

It took almost forty years for allegations against Strauss to become public. Although Ohio State officials knew of Strauss’ offenses back in 1979, an investigation wasn’t launched until 2018 when former OSU wrestler Mike DiSabato openly shared the story of his victimization.  Following DiSabato’s report, former Ohio State athletes began to speak up, their stories revealing how the University’s faculty and staff enabled and perpetuated Strauss’ abuse by implicitly normalizing his offenses and failing to disclose reports to law enforcement. Some survivors have named Ohio congressman Jim Jordan, former wrestling coach at OSU, as one of the many whose silence protected Strauss. Jordan denies having any knowledge of the doctor’s transgressions.

The duration and magnitude of Strauss’ abuses have drawn comparisons to Larry Nassar, the former USA Gymnastics and Michigan State physician who is serving life in prison for sexually assaulting over 300 people. While most of Nassar’s victims were girls and women, it appears that Strauss targeted boys and men. According to statistics cited by the University of Michigan, over 12,000 incidents of sexual violence against men are reported every year, but since this group tends to dramatically under-report, the actual annual victim tally is probably closer to 60,000. When it comes to reporting sexual abuse, the University of Michigan points out that boys and men confront unique social and cultural barriers. Many males are socialized to embody a kind of self-assured, self-sufficient masculinity that implicitly denies the possibility of victimization. Further, when males are victimized by men, prevailing homophobic attitudes may also prevent them from disclosing the abuse. Finally, due to lack of awareness and training, health care workers, law enforcement officials and others on the front line of care may not be attuned to signs of abuse in male victims. This lack of recognition can reinforce and magnify the sense of isolation that many male survivors experience.

While the media spotlights perpetrators such as Strauss and Nassar, a closer look reveals the hundreds of individuals who stood behind them, bearing silent witness to the men’s atrocities and the victims’ complaints. In the shadows, we glimpse the institutions and organizations that lacked enforceable systems for recognizing and responding to sexual abuse. Offenders such a Strauss and Nassar, who abuse hundreds of victims over the course of decades, do not act alone: they are supported by every one of their colleagues, superiors, institutions and organizations that turn a blind eye to their abusive acts, keep their secrets, normalize their offenses, and refuse to act on behalf of victims. Our attorneys are committed to obtaining justice for survivors by holding the people and systems complicit in sexual abuse accountable. If you would like to learn more, please contact us for a free consultation.