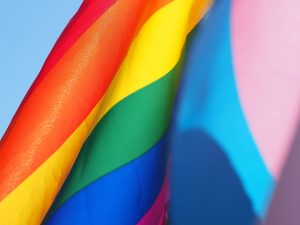 Bathrooms, restrooms, powder rooms: whatever you call them, access to them is essential. In our not-too-distant past, modern plumbing would have been regarded as nothing short of a miracle. Now, however, many Westerners expect the convenience of flushing toilets and clean, running water, whether in their homes or public spaces. The only time we may realize that we take access to bathrooms for granted is when we really need, but cannot find, a public restroom. But for thousands of transgender youth, entering a public restroom can be an agonizing decision that potentially exposes these young people to physical and emotional harm.

When babies are born, we assign them a sex – female or male –  which is usually based on their external sexual organs. Many people mistakenly assume that this assigned sex is indicative of an individual’s gender. But sex and gender are not interchangeable terms. Rather, gender refers to people’s understanding and labeling of themselves as male, female, a combination of both, or as neither male or female. The Human Rights Campaign defines “transgender” as “[a]n umbrella term for people whose gender identity and/or expression is different from cultural expectations based on the sex they were assigned at birth.” A transgender identity does not indicate anything about a person’s sexual orientation. So, based on genitalia, a baby may be called a boy from birth, but this sex assignment may conflict with the individual’s experience of herself as a girl. This discord between biology and self-concept can cause transgender youth intense emotional pain.

And things get more complicated when we go to the bathroom. Most public restrooms – and locker rooms – bear signs that say “Men” or “Women”; designations that supposedly make it easy for us to choose which door to enter. But for transgender people, this can be a complicated decision – or a choice that they are denied altogether. For example, a school’s policy, or implicit lack of support, may prevent a transgender girl from using the girl’s bathroom. Forcing this individual to use the boys’ restroom may out this individual to her classmates – especially if her peers had perceived her as a girl. If her classmates are aware that she had been biologically designated as a boy and are hostile to her gender expression, the boys’ bathroom she is forced to use – a semi-private area out of the realm of adult supervision – becomes the ideal place to harass and even assault this transgender youth. Further, denying transgender people access to their bathroom of choice sends the not-so-subtle message that they are not entitled to the same rights and privileges as non-transgender people.

Those who want to prohibit transgender people from using their bathroom of choice assert that this right would expose non-transgender individuals to danger. Opponents of bathroom choice express the conviction that transgender women, in particular, will use access to women’s restrooms to perpetrate sexual assaults. Evidence, however, does not support this allegation; in fact, studies show that transgender people are disproportionately targeted by sexual perpetrators. According to a study cited by CNN, 36 percent of surveyed transgender and gender-nonbinary teens who were prohibited from using their bathroom of choice had been sexually assaulted. Further, denying transgender students access to their bathroom of choice may impose physical distress: transgender youth may restrict their intake of fluids or avoid using the bathroom altogether, putting them at greater risk for UTIs and impacted bowels. According to a study reported in US News & World Report, “Nearly two-thirds of transgender teens say they avoid using the bathroom at school whenever possible, but when they have to, they use a restroom that doesn’t match their identity.” In order to avoid anguish that comes from what should be a simple act – using the bathroom – some transgender youth skip school altogether. While this serves as a gesture of self-preservation in the moment, leaving school can ultimately increase the isolation of transgender youth, while putting them at greater risk for poverty and homelessness.

Studies consistently show that lesbian, gay, bisexual, transgender and queer (LGBTQ) students are at higher risk for sexual harassment and assault.  The discrimination these young people face on a day-to-day basis impedes their social, emotional and physical development. The majority of experts agree accepting and nurturing young people for who they are – rather than forcing them to conform to societal mandates of gender and sexual identity – provides a foundation for healthy development. Our attorneys are committed to fostering the well-being of all our youth. If you or someone you know has been the target of sexual violence because of your gender identity or sexual orientation, please contact us today for a free consultation.