Enduring Legacies: The Causes and Consequences of Intergenerational Trauma 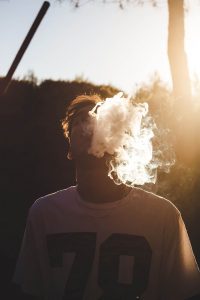 President Donald Trump called vaping a “problem,” and his health secretary said the government would force companies to remove flavored vaping products from the market as an epidemic of underage use shows no signs of abating.

“Not only is it a problem overall, but really specifically with respect for children,” Trump told reporters at the White House after a meeting with advisers including Health and Human Services Secretary Alex Azar and Acting Food and Drug Administration Commissioner Ned Sharpless.

“We may very well have to do something very, very strong about it,” Trump said.

Vaping has become a source of growing unease for parents and public-health officials over the past year amid signs that underage use is surging. A U.S. government survey of youth tobacco use released early this year showed 3.6 million school-age children had vaped in 2018. On Wednesday, Azar said that number has jumped to 5 million, calling it an “alarming” trend.

At the same time, vaping has been linked to a mysterious acute lung ailment that’s spread across multiple states. More than 450 cases of the respiratory condition were reported as of Sept. 6, according to the Centers for Disease Control and Prevention. The severity of the cases vary, but six people have died.

Azar said the FDA would issue guidance in coming weeks that would lead to all flavored vaping products other than tobacco-flavored offerings being removed from the market within 30 days. Producers of other flavors would then have to apply with the agency to resume sales. To gain FDA approval, an e-cigarette manufacturer must prove to the agency that the benefit of its product outweighs the risk, including the potential for underage vapers to pick up the habit.

“The FDA plans to share more on the specific details of the plan and its implementation soon,” according to a statement from HHS.

Congress gave the FDA the authority to oversee tobacco in 2009. The agency began policing cigarettes then but didn’t add e-cigarettes to its portfolio until 2016.

The FDA had been looking to limit most flavored e-cigarette product sales, excluding mint and menthol, to online sales with age verification and vaping shops.

Former FDA Commissioner Scott Gottlieb originally viewed e-cigarettes as a possible way to help adult smokers quit and sought in 2017 to ease regulation on them, pushing back to 2021 the date vape manufacturers would have to apply for agency approval to stay on the market. A federal judge in July pushed that date up to March 2020.

Cigarette alternatives, including vaping pens, have become a big business. Juul Labs Inc., which has the biggest share of the U.S. market for e-cigarettes, is one of the country’s most richly valued closely held startups. Marlboro maker Altria Group Inc. last year invested about $13 billion in Juul at a valuation of approximately $35 billion. Altria shares fell as much as 0.8% in New York trading on Wednesday.

Juul’s marketing tactics have drawn growing scrutiny from regulators and lawmakers. The FDA sent Juul a warning letter Monday that said the agency had determined that the company has marketed its products as less risky than cigarettes without gaining the agency’s approval. A Juul representative said that the company was reviewing the letter and would cooperate with the agency.

Around the U.S. this summer, doctors have seen hundreds of cases where patients — often youthful, previously healthy adults — have shown up in the emergency room, suddenly stricken with dangerous respiratory damage.

The CDC has said anyone who uses a vape device should consider stopping while public health officials investigate the cause of the condition. The public-health agency said on Friday that the lung-injury cases were appearing most often in people who used vaping products containing THC, the key psychoactive ingredient in cannabis.

State health officials in New York have pointed to vitamin E acetate as a likely culprit. While thought to be harmless when used as a nutritional supplement, it could carry risks when inhaled and has been found in some products, said New York health officials.